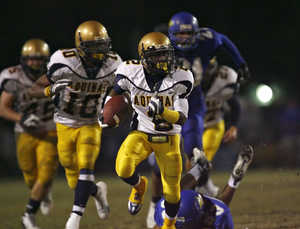 For the fourth consecutive year, St. Thomas Aquinas will be playing for the State Championship. In 2004, 2005, 2006, the Raiders lost to Lakeland. For anyone who knows anything about High School football, they will remember last year’s championship as the game that St. Thomas was down by 28 points with something like three minutes left, and went on to get four touchdowns and three onside kicks to send the game to overtime. Unfortunately, the Raiders fell short, 45-42, when Coach George Smith decided to go for the touchdown and the win on fourth down, but came up inches short.

Tonight at 7 p.m. on Sunshine Network, STA will take on Kissimme Osceola. You’ll see a few future ‘Canes on the Raiders. Also, you will see Cris Carter on the sideline as an assistant coach and his son playing at wide receiver.